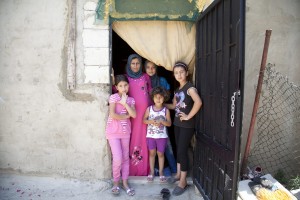 As Syria staggers into its fifth year of a brutal civil war, almost 12 million people – fully half the country’s population – are homeless, including 7 million internally displaced people inside Syria and 4 million refugees outside the country who have little hope of returning to Syria safely.

Half of those uprooted are children who have been traumatized by war, robbed of an education, forced from their homes and now live in appalling conditions in exile. Syria’s neighbours are struggling with the demands placed on them by the sudden influx of refugees. As of May 2015, there were almost 4 million registered Syrian refugees in the region, including 1.7 million in Turkey, 1.1 million in Lebanon and 600,000 in Jordan. As conditions deteriorate, with further influxes of refugees in Iraq and Egypt, the entire Middle East is threatened. Canadians can help prevent a disaster from becoming a catastrophe. Every family that we can resettle is one step closer to a resolution. Refugee sponsorship and international resettlement offer a new life to the most vulnerable; eases the burden on regional host countries and holds out the hope that international pressure might help resolve Syria’s crisis. Canada has already promised to resettle 10,000 Syrians over the next three years and is counting on private sponsors to account for a significant portion of that figure. Lifeline Syria aims to resettle at least 1,000 Syrian refugees in the Greater Toronto Area over the next two years, emulating Canada’s incredible response to the Indochinese Refugee Movement of 1979, when Canadians successfully resettled 60,000 Vietnamese “boat people”.

Like Operation Lifeline with the boat people 35 years ago, Canadians then as now had the opportunity to demonstrate their incredible leadership in directly assisting humanitarian efforts to save thousands of lives. The current Syrian refugee crisis is real and in many ways larger than the boat people. Governments in Canada and elsewhere can not solve this problem alone. Community sponsorship efforts are the key. Canadians are up to the challenge. Hon. Ron Atkey

To learn more in depth about the issue read Facts and Statistics and A Plan of Action.

To help you inform your students about refugee issues – UNHCR Educational Materials for Teachers.

An educator’s guide to welcoming Syrian refugees – adaptations to make Ontario schools safe places for newcomers, and to address  emotional and educational needs.

Caring for Syrian Refugee Children: A Program Guide for Welcoming Young Children and their Families reminds early childhood educators of the unique experiences and needs of Syrian refugee children.

We are One Canada – by Canadian children to teach beginning Arabic to English speakers.